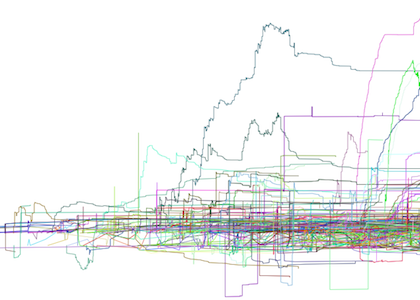 In recent years, there has been a huge increase in the number of bots online, varying from Web crawlers for search engines, to chatbots for online customer service, spambots on social media, and content-editing bots in online collaboration communities. The online world has turned into an ecosystem of bots. However, our knowledge of how these automated agents are interacting with each other is rather poor. Bots are predictable automatons that do not have the capacity for emotions, meaning-making, creativity, and sociality and it is hence natural to expect interactions between bots to be relatively predictable and uneventful. For this project, I collaborated with Ruth García-Gavilanes, Luciano Floridi, and Taha Yasseri from the Oxford Internet Institute to analyze the interactions between bots that edit articles on Wikipedia. We tracked the extent to which bots undid each other’s edits over the period 2001-2010, modeled how pairs of bots interact over time, and identified different types of interaction trajectories. We found that, although Wikipedia bots are intended to support the encyclopedia, they often undo each other’s edits and these sterile “fights” may sometimes continue for years. Unlike humans on Wikipedia, bots’ interactions tend to occur over longer periods of time and to be more reciprocated. Yet, just like humans, bots exhibit cultural differences in behavior. Our research suggests that even relatively “dumb” bots may give rise to complex interactions, and this carries important implications for Artificial Intelligence research.

The article was published in PLOS ONE.