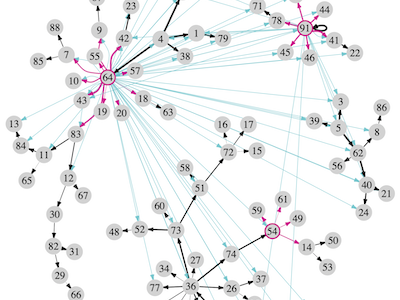 Antisocial behavior can be contagious, spreading from individual to individual and rippling through social networks. Moreover, it can spread not only through third-party influence from observation, just like innovations or individual behavior do, but also through direct experience, via “pay-it-forward” retaliation. In this study, Ji Eun Kim (LSE MSc ’20) and I distinguish between the effects of observation and victimization for the contagion of antisocial behavior by analyzing large-scale digital trace data. We study the spread of cheating in more than a million matches of an online multiplayer first-person shooter game, in which up to 100 players compete individually or in teams against strangers. We identify event sequences in which a player who observes or is killed by a certain number of cheaters starts cheating and evaluate the extent to which these sequences would appear if we preserve the team and interaction structure but assume alternative gameplay scenarios. The results reveal that social contagion is only likely to exist for those who both observe and experience cheating, suggesting that third-party influence and “pay-it-forward” reciprocity interact positively. In addition, the effect is present only for those who both observe and experience more than once, suggesting that cheating is more likely to spread after repeated or multi-source exposure. Approaching online games as models of social systems, we use the findings to discuss strategies for targeted interventions to stem the spread of cheating and antisocial behavior more generally in online communities, schools, organizations, and sports.

The study was published in Network Science.