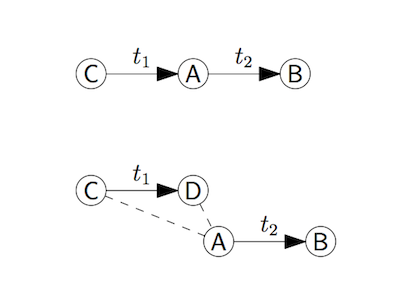 Previous research has suggested that generosity may spread among individuals. However, the mechanisms through which such contagion occurs have remained unknown. Michael W. Macy and I distinguished between two mechanisms for the contagion of prosocial behavior among strangers: generalized reciprocity (a recipient of prosocial behavior is more likely to pay it forward) and third-party influence (an observer of prosocial behavior is more likely to emulate it). Generalized reciprocity transmits the contagion from person to person through direct contact, while third-party influence has the potential to broadcast the contagion from one person to any number of observers. Thus, the separate effects and the interaction between the two mechanisms imply complex dynamics.

We designed, developed, and conducted a large-scale online experiment that presented participants with the opportunity to donate anonymously part of their payment to another participant. We found that receiving or witnessing a small number of donations increases generosity. Witnessing many acts of generosity actually decreases the proclivity to help but only among non-recipients. These findings were published in PLOS One and as a Sunday op-ed in The New York Times and featured on Wisconsin Public Radio and in Inc. Magazine.